If you are an organizer working in any way to make progressive change, this framework is probably familiar:

This framework for community organizations and organizers has both strengths and weaknesses. Its strengths are that it is simply, practically oriented, and focuses on the oppressed as agents of their own change.  Among its weaknesses are its inability to develop (at least so far) long lasting victory, it’s often short-sighted practicality, and its lack of an all-around story line about the future. 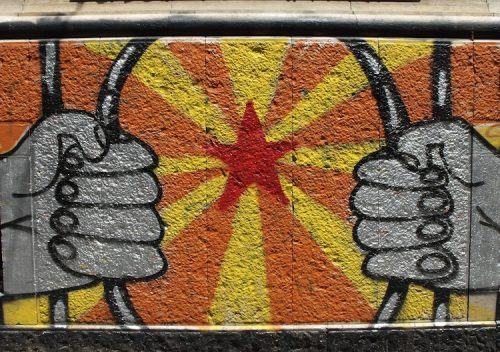 The many books written on this framework and the organizations using it have been mostly “practical,” “how-to” manuals on organizing.  Very few of these works apply a comprehensive view that helps us to hold a vision, an analysis and a strategy for change.

Thus, a major question before us is: can community organizers and their organizations achieve lasting structural change without explicitly articulating an ideology and long-term vision?

How do we come to know that change is even possible?  Some people might say that organizers are dreamers and visionaries.  They might be right.  How do we ground our dreams and visions with a real understanding of the conditions we encounter today?

We know that when we make a journey that we have a starting point and an end point.  We know that the journey is not simply where we started and where we ended.  The journey is made of everything that we did to get to the end point.  For example, when we say “we went to New York,” we know that the process consisted of several interlocking and connected efforts both in regard to our plans and the actual conditions that we faced to get there.  Did we plan to drive or fly?  Is the weather fair or will there be snow?  These and other questions impact how we will get there.  In other words, we have developed a strategy.  Our strategy is best accomplished when it is informed by our experience and the actual conditions that we are about to face when we make that journey.

We have a vision of a better world.  In our work, that is our goal and objective—the end point of the journey so to speak.  Even in the work for a better world, for fundamental social change, we need to develop both a method and strategy.  It is no different than planning a trip to New York. This method can provide us a critique of capitalism, the organizing principle in the world we live in today.  This method can also help us to understand how something so radically different from what we experience now under the system of capitalism can be possible.  Finally, this method can help us to develop a strategy that will help us to win change. This method is dialectical and historical materialism.

Let’s start with the basics:

Materialism rests on the belief that there is a real world out there independent of a person’s mind, but has meaning and implications for how people experience and interact with reality.

Dialetics is the logic of change. There are three parts to this logic:

3. Negation of the negation. Sometimes this is referred to the idea of the synthesis, of a thesis and an antithesis.   For example the idea of “Unity-Struggle-Unity or “Practice-Theory-Practice.”  Starting with unity and applying the opposite of struggle we ideally would arrive not at the level of unity that we started with but at a higher level of unity. Simply stated, this means that change is not circular or linear but more or less change is cyclical.

Putting them together, dialetical materialism means that a real world exits and the way people interact with it shapes their consciousness and hence strategies for resolving contradictions.

Dialectical and historical materialism is both a theory of change and in many ways a method.  More than anyone else this method has been attributed to Karl Marx, who expanded and synthisized the analytical methods of many thinkers before him.  Some form of dialectics has probably existed from the time that there were beings who could apply reason to their experiences.  Human beings have always tried to explain the process of change and how it relates to factors of time, place, and condition.  How does the past impact the present and the future?  What is the difference between what really is and what we are told is,  and how do we resolve that contradiction?

Reaction from the right to dialectical materialism

As you might imagine, not everyone is down with this theory and method for social change.  There is a strong current that denies that contradictions exist in our society and deny that change is possible. These folks are in the main promoters and defenders of capitalism, especially neo-liberalism.

A major theoretician relied upon by this group is Francis Fukuyama who in 1992 wrote a book called The End of History and the Last Man.  He said,

“What we may be witnessing is not just the end of the cold war, or the passing of a particular period of post-war history, but the end of history as such: that is, the end point of mankind’s ideological evolution and the universalization of Western ‘liberal democracy’ as the final form of human government.”

By saying that capitalism and liberal democracy was the highest and ultimate stage of human history and development, this statement stands in direct contradiction to the dialectical materialist understanding of history which holds that there is no end to change in any realm, including ideology.  Fukuyama’s views were used to support the thinking of the neoconservative movement and challenge the notion that any way of organizing society other than capitalism under a particular type of political structure was not desirable or even possible.  In the midst of the economic crisis which laid bare the various contradictions of global capitalism, Fukuyama had to step back from some of his views.

How does this relate to organizing?

Organizers know that there are really pressing questions around our organizing. We know that we are dealing with a system of exploitation and oppression. We know that there are forces out there that are committed to keeping things the way they are and will stop at nothing to maintain their stronghold. We might not know the fundamental relations that give rise to and exist in the system that we are up against. Sometimes as organizers we are looking at the part without being mindful of the whole.  The dialectical method helps us to look at the whole with an aim at looking at the interconnectedness of things.

For example: why are people poor? For some the answer is that people are poor because they are lazy and don’t want to work.  Some people may be lazy and not want to work, but is that the reason there is poverty? Aren’t there lazy rich people who don’t want to work? Dialectics would look at poverty in regard to certain relations and interconnecting factors. Dialectical materialism would say that you could not understand poverty or resolve the issue of poverty in isolation from the whole of reality.  We can’t understand this in an isolated and static manner.

Dialectical and historical materialism has already helped us to see some of the inherent contradictions in the capitalist system and the cyclical nature of economic crisis due to capital accumulation (profits for example) and overproduction (making more things than there are buyers).  To go even farther by understanding how our capitalist present was born out of the past economic relations of feudalism we can begin to see how a society based on the fair and equitable distribution of resources and the possibility of a society that fulfills the aspiration of our humanity is being born out of this society.

Dialectics can’t give us an instant answer to every question. It’s not a crystal ball or an oracle. It is a useful and helpful tool. It’s a tool for the journey.  It is a tool for revolutionary change.

Badili Jones is an African-American gay Marxist socialist, was involved in the Black Student Movement and Liberation support work since his early teens. He came through the New Communist Movement. He studied philosophy and the roots of Latin American Theology of Liberation. Today, he is involved in the work of popular education and leadership development for grassroots community organizations on a local and national level.